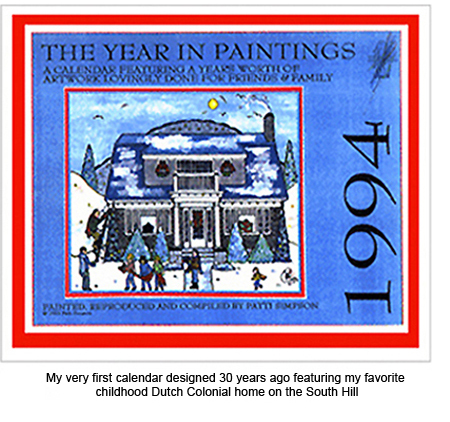 WHAT INSPIRED THE CREATION OF THE CALENDARS 27 YEARS AGO . . .

It has been a short 27 years sharing settings I've loved enough to paint and feature in these date-keepers. I began designing them at Christmastime in 1994 when my sis Marilee shared, "We have no more wall space! Instead of giving us prints, why don't you design a calendar with lots of pictures that we can enjoy all year long?"

The first issue featured the Codd House on the cover ~ a Dutch-colonial built in 1925. It was my favorite home as a youngster growing up in Spokane, WA. I've painted it five times. The cover showed my family (five of six siblings at the time) decorating the house with lights. All of us helped. I pictured my dad Joe on the ladder while Sally mom kept them from tangling ~ a huge frustration. My dad passed away in 1988 before I finished this portrait, so it brought tears to my mom's eyes. Memories . . .

In 1994, Kinkos (absorbed by Fed Ex) Store Manager Scott Woodward printed a dozen at his Seattle Northgate Mall Store. These days, Rita McIntyre at Berreth-Thomas in the Spokane Valley runs hundreds of them in multiple editions. Both local Spokanites ~ and folks who grew up here, moving away later ~ order these from all over the United States and beyond.

ENTIRE LIST OF CALENDARS BELOW ~ The calendars have come a long way since 1994. Find the entire list of past titles and a handful of past covers below.

THREE 2021 CALENDARS with 15 NEW PAINTINGS ~ Each calendar has at least three NEW 2019-2020 paintings and two have six each! Cover images and Bold Red Titles link you to 6-page Preview pdfs for each 2021 calendar. These include ~

HISTORY OF THE "PARK BENCH" ~ Visitors to beloved Manito Park have flocked to the Park Bench Café for decades. In the beginning, the park included a zoo from 1905 to 1932 with wildlife like bears, elk, buffalo and more. At that time, south of Mirror Lake (also known as the Duck Pond) and north of the Headhouse Administration Building and Joel E. Ferris Perennial Garden, there was a small pond populated with swans and ducks with a small hut in the center of it. In 1923, a decision was made to fill in this pond and tear down the hut to make way for the new shingle and basaltic rock structure that became known as the Park Bench Café.

MUSIC AT MANITO ~ Music was an important part of Manito Park from nearly the beginning. When I painted this portrait of the cafe, concerts were still being offered without charge to the picnicking public on Friday evenings from Memorial Day to Labor Day.

Highlight ~ At one point, in addition to serving refreshments, the Park Bench Café also offered skates and bicycles for rent to park visitors.

THE 10TH MAYOR'S HOUSE ~ This handsome historic Victorian, located at the east section of Spokane’s oldest neighborhood at 1728 First Avenue, was designed by renowned architect Loren Rand in 1899 for the Powell family. Edward Louis Powell served the fledgling community of Spokane’s as its tenth mayor.

THE HISTORIC B&B ~ When I finished my portrait of it, Louie Flores and Gillian Cranehahn were the proprietors of this fine inn and private residence, perfectly named “1899 House B&B.” Extensive renovation had been completed on the structure ~ including a restoration of the home’s original exterior color scheme. With helpful grants from Spokane Preservation Advocates (SPA), the couple created an inviting, gracious, hospitable place for folks to stay.

Over the years, Louie and Gillian have been active members in the Browne’s Addition Neighborhood Council. This organization helped ensure the historic preservation of the neighborhood as a formal historic district with assistance from the city’s Historic Preservation Office and SPA.

Highlight ~ ~ In 2016, I painted a portrait of Browne’s Addition’s Coeur d’Alene Park (Spokane’s first and oldest) for a raffle that the stewardship group Friends of Coeur d’Alene Park held for nearly a year to raise much needed funds for park improvements. Gillian held the winning ticket and the original painting found a place of honor in the B&B’s Rigsby Suite.

THE LAST DAY OF SCHOOL ~ Summer Break at last! In this piece, families and friends have gathered to collect the kids with Pastor Tom Lamanna, S..J. and Principal Angie Krauss on-hand to say good-bye for the school year.

HISTORY OF THE SETTING ~ St. Aloysius Gonzaga Parish grade school opened in September 1916 on the grounds of Gonzaga College. Decades later in 1940, a new brick school on 611 East Mission Avenue began educating. The Holy Names Sisters, who also staffed nearby Holy Names Academy (closed in 1975), were an integral part of this Jesuit-based school.

THE GOAL OF THE JESUITS ~ The Jesuit goal has always been to create outstanding leaders based on the teachings of Jesus Christ ~ as evidenced in Spokane with the Montessori Pre-School, Saint Aloysius Gonzaga Grade School, Gonzaga Prep, Gonzaga University and Law Gonzaga School. Over the decades, this goal has remained intact. The  elementary school pictured here was enlarged and improvements made to meet the needs of the faculty and students.

Highlight ~ I painted this portrait of Saint Al's School for their 2020 annual fund-raiser, including friends and their families in the piece.

Click here on PAST AMERICANA CALENDARS (1994 to 2020).pdf for a complete list of ALL editions created since I published the first one in 1994. Washington State communities include King County's Seattle, Bellevue, Redmond, Kirkland and other Pierce, Snohomish and San Juan County (Roche Harbor) communities. as well. The area most frequently featured is the Inland NW. Spokane is my beloved home town and where my husband and I currently make our home. I've also included images of several covers as well from 2012 to 2020.

4th Edition Perpetual Life Fine Art Journals are SOLD OUT in both the Spokane and Washington State editions, but NEW 5th editions of the Spokane Journal will be available soon! These include:

For 2019's Holiday art events, I introduced 3 Collage Jigsaw Puzzles pictured here. They SOLD OUT in less than a month, so look for 3 NEW puzzles plus a re-release of these initial editions in Spring 2020. The finished puzzle size is 16x20-inches ~ perfect for standard-sized framing. Here's a description of 2019's initial release.

PittyPat Gallery & Studio ~ OPEN LATER IN 2020. If you have questions, please phone for details.